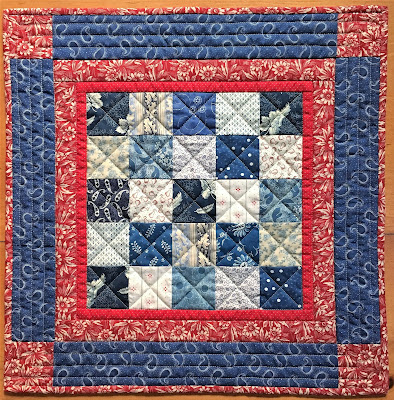 This time I actually eye-balled the quilting lines. No marking. 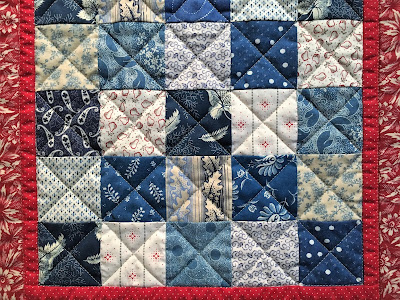 The last of the blue squares. 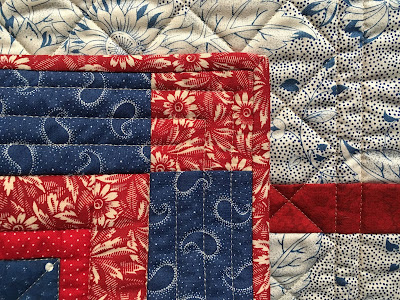 And to switch things up a little I did a single fold 3/8" binding rather than a double. I attached the binding strip to the quilt's edges and then trimmed the seam allowance. Would you believe I actually slit the fold at one of the corners by mistake?? That was a real surprise! But I was able to repair it without removing and inserting a new piece :) Whew! 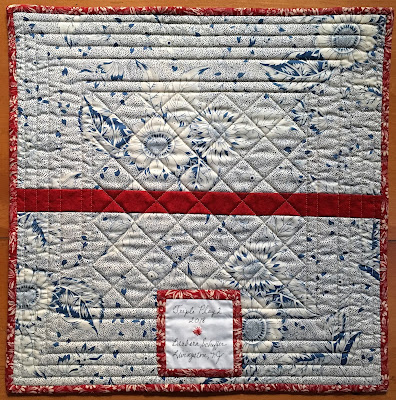 Another fat quarter came in handy for the back. 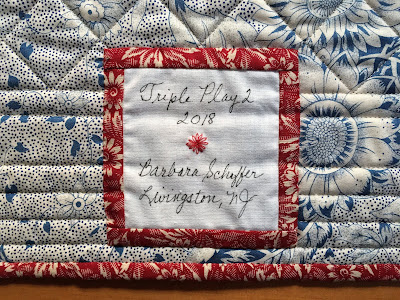 I added a little "thread flower" to fill in the empty space on the label :) 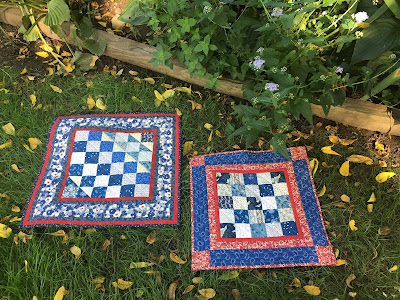 I was actually going to wait until next week to post my mini for August but the pressure is on, haha! Wendy and Kyle have already posted their delightful quilts here and here. Don't you just love them?

My August mini was the result of leftover squares and triangles that just kept re-surfacing in my sewing room. It finally seemed like the right time to do something with them, besides, I always loved these blue fabrics. 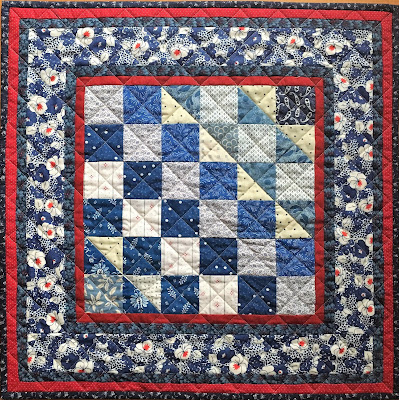 This is Triple Play 1. The blue/white/red floral border fabric was part of Keepsake Quilting's Americana collection that I purchased at our guild meeting in June. 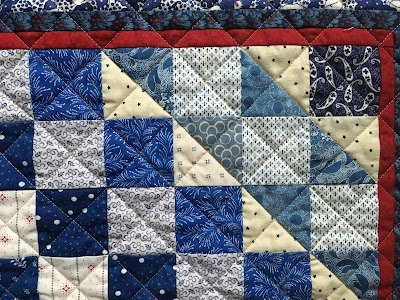 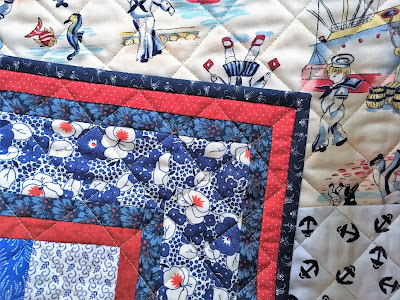 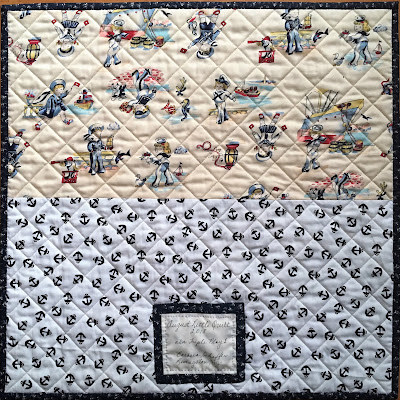 Two nautical-themed fabrics on the back :)

Triple Play 2 is also finished but I will post that next week before we go away for the holiday weekend. Hint: More of the same leftover squares :)

Last December I saw this Birds In Air Variation quilt at the Schuyler Hamilton House in Morristown, NJ. See my blog post here. 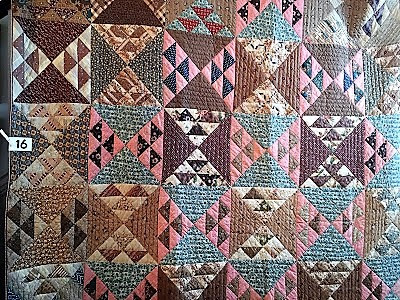 I loved everything about it--the way the blocks rotated and the brown/pink/blue color combination. There were some pretty fantastic fabrics, too! 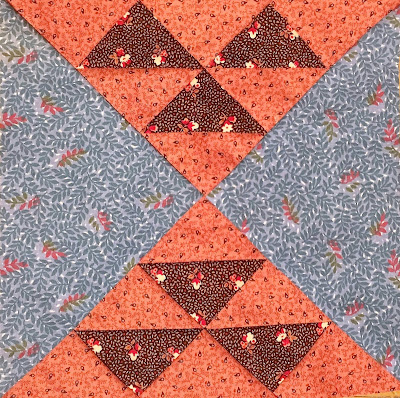 Shortly after, I made this sample 8" block. I realized the look I was after was so dependent on the right 'blue' but had a difficult time finding one that I thought would work. So this project was pushed aside.

Then I came across the same pattern on Barbara B's blog A Cloud of Quilt Patterns where she referred to it as A Scrappy Chintz Quilt: Odd Pattern but renamed it A Ride in the Cars. 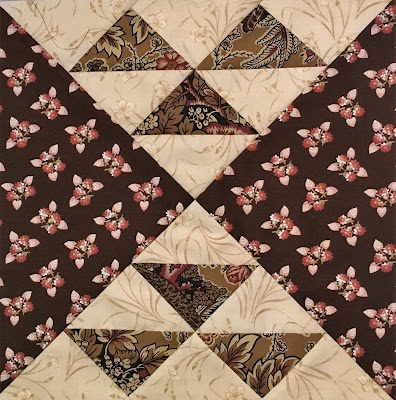 I changed my mind about what fabrics to use and pulled out some "early" browns instead. Barbara provided the cutting instructions for a 12" block so that's what I decided to make. 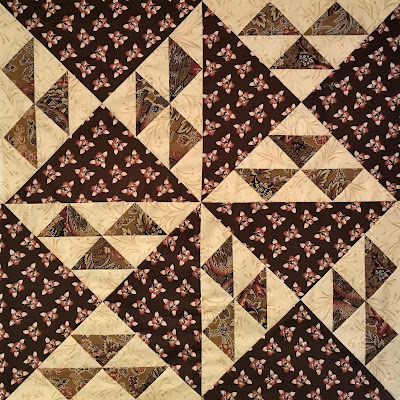 In fact, four seemed to be the magic number for me. 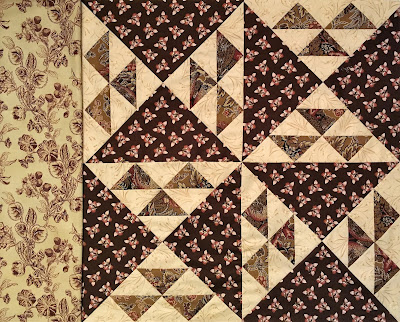 Now I'm thinking of using this floral fabric as the border and adding corner blocks to keep it simple.

Maybe next week I will have made up my mind and the top will be finished :)

I'm hooked on these sweet 8" Dear Daughter blocks that are being offered by Gaye at Sentimental Stitches. 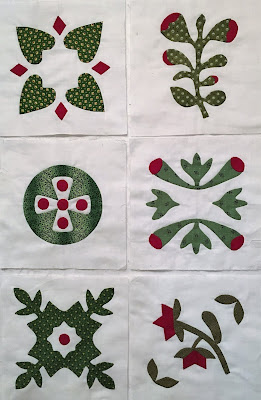 I started this project a few months ago concentrating on blocks that were attributed to NJ--specifically, the one on the top left and the three on the right. The originals were signed by members of the Dunham and Clawson families in Piscataway and Marlboro in the central part of the state. 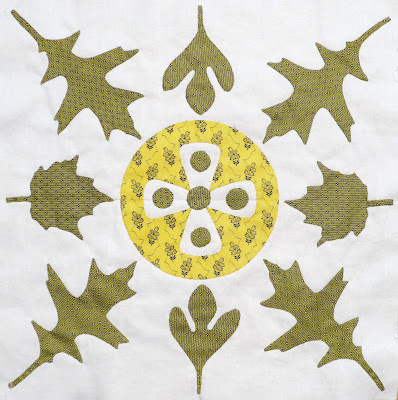 After I made the first three I couldn't wait for the next set to become available so decided to recreate the center of this block that I made a while ago also from a NJ quilt. 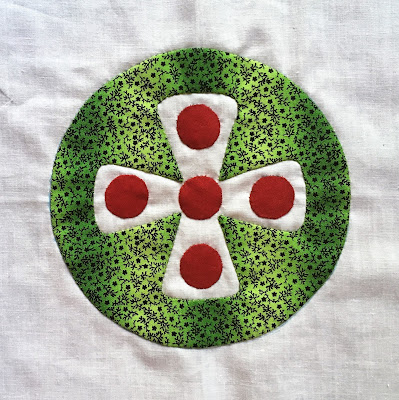 For some reason I'm focused on using green with touches of red and am liking the way it looks. 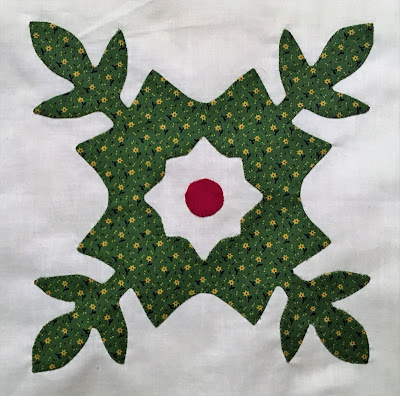 I added the red dot to this one. 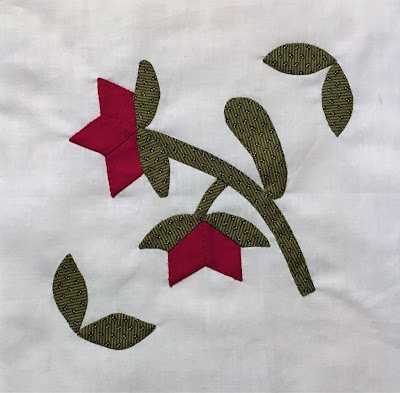 I think these small blocks are charming and they're so easy to work on during hot summer days. 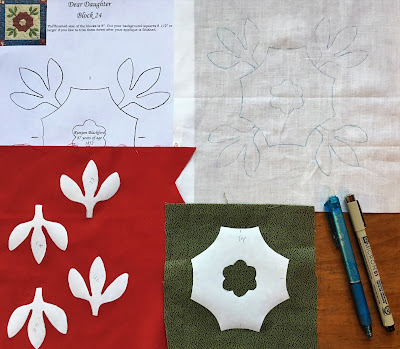 I've prepped the next one but reversed the colors as shown in the original above. I traced the pattern onto my background square using a blue Frixion pen and will outline the appliques with an 01 black Pigma pen. Any blue lines that show when I'm done will disappear with an iron.

Check out Barbara B's post this week to see some new ideas for setting the Antebellum blocks including a NJ quilt and my small Chimney Sweep. Thanks, Barbara!

This week I finished Antebellum #7 Chimney Sweep. Barbara B's instructions for vertical row piecing made this block easy to assemble. 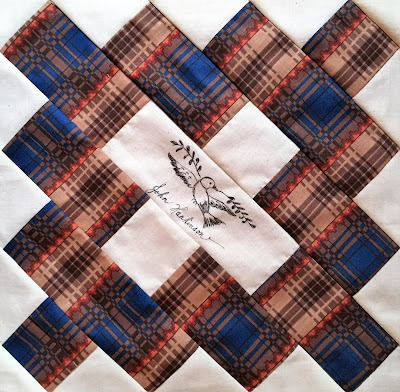 In keeping with adding the names of my 2nd gr-grandparents, this block is in memory of John Hankinson, an English immigrant. According to the 1841 & 1851 England censuses, John, a brick layer, his wife, Alice, and their children were living in Liverpool. They immigrated to the U.S. in 1851. For more than twenty years (1854-1876) John was listed in the NYC Directories as a mason with his business at 464 Greenwich St. and residence at 36 Renwick. Both are in the area of the Holland Tunnel in lower Manhattan.

I chose to copy this inking that Barbara had posted on her blog a while ago. 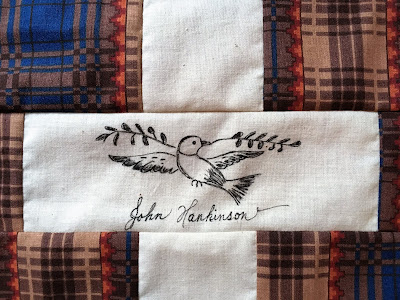 Would you believe the first time around I didn't leave space for a seam allowance? What was I thinking?? This is version #2 :) 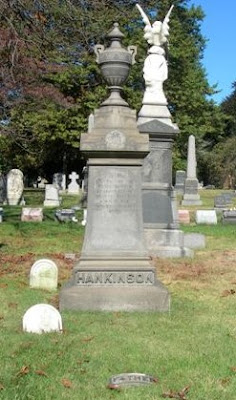 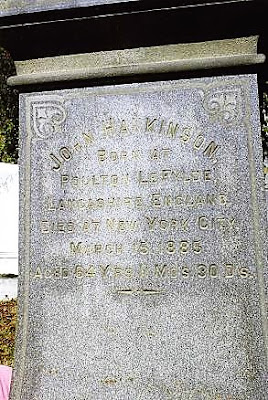 When John died the attending physician was Samuel S. Purple, a founding member and past president of the NY Academy of Medicine and for many years the editor of the NY Genealogical and Biographical Record. After all these years the Purple name continues to haunt me. My grandmother Maud Hankinson Davis states her mother was Mary Purple but I haven't yet been able to make that connection.

So back to Chimney Sweeps for a minute . . . 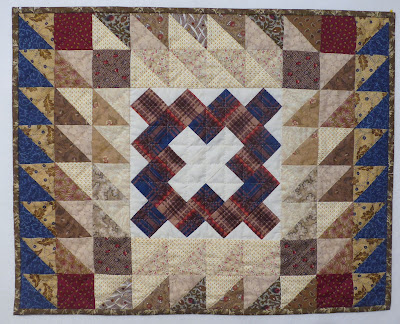 Here's a little piece I made in 2004 based on a doll quilt that was documented by HQPNJ. 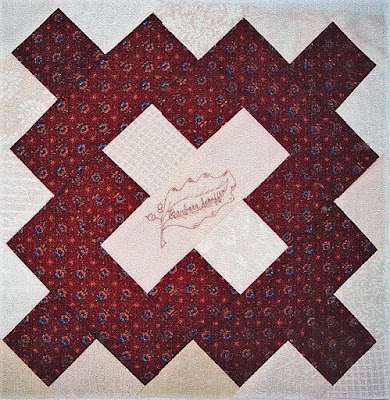 In 2006 Barb V. and her friend, Mary, were co-chairs of GSQs Friendship Quilt. I had to provide the red fabric for my block so this is what I chose. 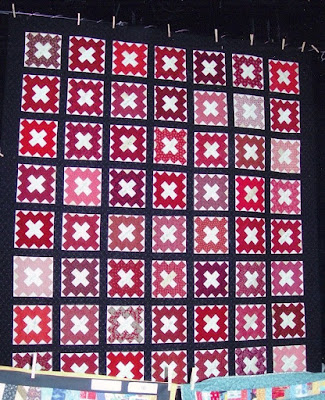 A wonderful assortment of reds and one lucky winner :)