A Christmas Quilt, A Gravestone, and an Elusive Ancestor

As Christmas is almost here I thought it would be fun to feature one of each: a quilt, a gravestone, and an elusive ancestor. In 1979 I made a Christmas quilt inspired by a Christmas card that I received. For years, I've been placing greens on the graves of my parents, grandparents, and other relatives, and my featured elusive ancestor is my 3rd great grandmother, Clarissa Vermont Miller. 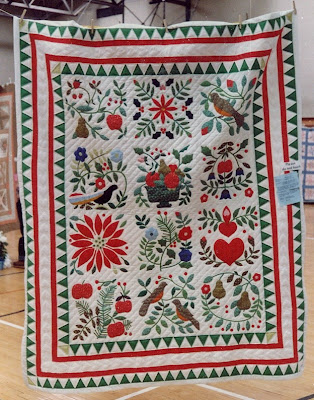 In 1979 I received a "quilty-looking" Christmas card and immediately went to work making a quilt based on its design. Appropriately, I named my quilt A Christmas Card. Many of the fabrics I purchased at a local fabric outlet, especially the Ely and Walker prints that I used for the fruits, birds, and leaves. When it came time to put the first green and white border on, I miscalculated the measurement. So after sewing it all together I had to then take it all apart and re-cut some of the triangles or widen the seam allowance where necessary. I quilted around the motifs and in diagonal rows in all the blocks, 1/4" inside the seams of the triangles, scallops in the red borders, and hearts in the solid white borders. The quilt is shown here in 1980 at the American Field Service Quilt Show in Allendale, NJ, where it won Best in Show. The same year it won 1st place at the Quilt Show in West Orange, NJ. I consider this quilt "my applique masterpiece." At Christmas time I put it on the bed or drape it over the settle bench in the hallway. 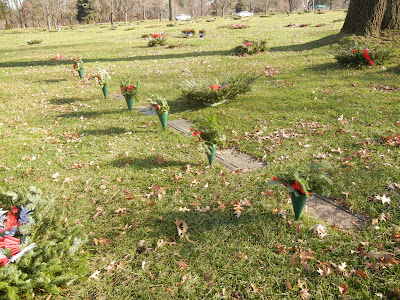 For years, my aunt Midge and I would make our annual trip to the cemetery where our relatives are buried and place bouquets of greenery in front of all the graves. We'd also put a grave blanket in between her husband's grave and my parents' as they are buried next to each other. Now that my aunt is no longer with us, I am the one to continue this tradition. It's a feel-good thing to do during the holiday season. 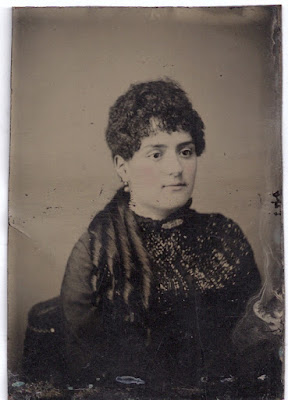 T
My elusive ancestor is my 3rd great-grandmother, Clarissa Vermont/Vermount Miller. My great-aunt Leila once told me Clarissa was "lost at sea going back to France" to visit family. Interestingly, census records indicate Clara was born c. 1809 in NY, not France. She married Abraham Miller of West Farms, Westchester, NY, about 1827 and they had the following children: Edward, James, Clarissa, Abraham, Aaron, Ellen, Charlotte, Amelia, Caroline, Maria (my gr-gr-grandmother), and Mary Elizabeth. Abraham died between 1870 and 1880 as Clara, 72, was enumerated in 1880 living with her son Aaron in Brooklyn, NY. If she made this doomed voyage to France my guess is it had to have been after June 9, 1880, the date she was enumerated. I hope someday to find out what really happened to her but, in the meantime, she will remain one of my elusive ancestors.
Posted by Barbara at 10:27 AM