Jonathan Squier (1693-1789) was one of the earliest known settlers of Livingston, NJ, having purchased lands near the Passaic River from the East Jersey Proprietors in 1744. Jonathan and his second wife, Lydia Camp, had two daughters, Mary and Rachel, and four sons who were Captains in the Revolutionary War, Nathaniel, Zophar, Jonathan, and Elijah. 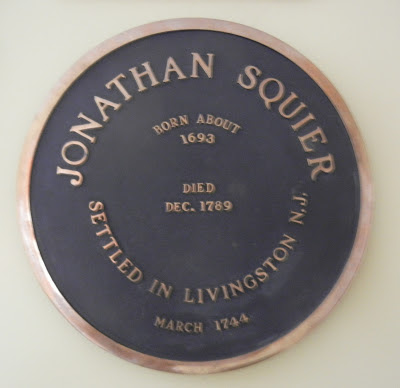 This plaque hangs in the The Force Home which is maintained by the Livingston Historical Society.

Nathaniel, Zophar, and Elijah are all buried at the First Presbyterian Church of Hanover, East Hanover, Morris, NJ. 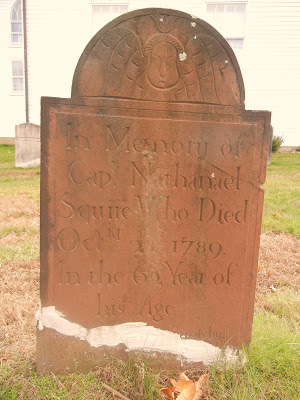 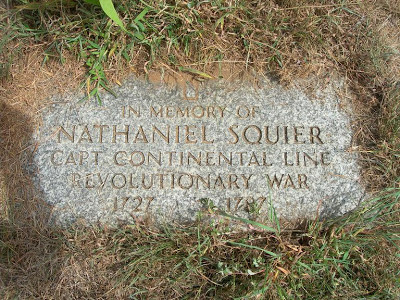 Jonathan Squier's will was proved Feb. 2, 1800 two months before his brother Zophar's. Brother Elijah was a witness. 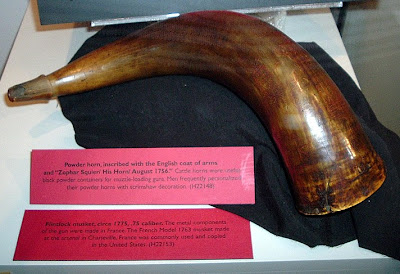 Zophar Squier's powder horn is in the collection of the Ohio Historical Society. It is inscribed with the English coat of arms and "Zophar Squier, His Horn, August 1756." 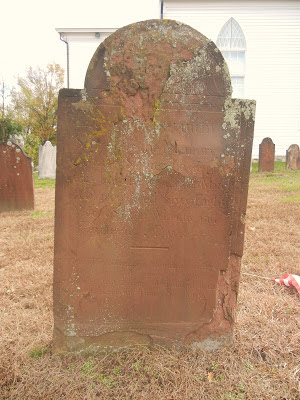 Sacred
to the Memory
of
Zopher Squier
he departed this life
the 2d day of March A. D. 1800
Aged Sixty-Eight Years and Seven Months
and Fourteen Days.
Our life contains a thousand strings
and dies if one be gone.
Strange that a harp of thousand strings
should keep in tune so long.

An abstract of Zophar Squier's will dated Jan. 6, 1800. The will was proved April 9, 1800. Brother Elijah, along with Joseph T. Hardy (Esq.), were witnesses and inventoried Zophar's estate. 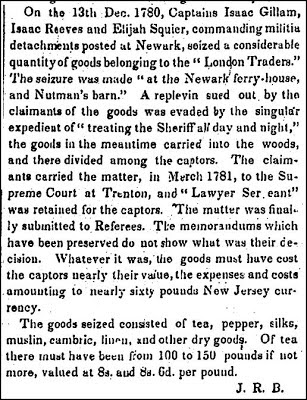 
"On the 13th Dec. 1780, Captains Isaac Gillam, Isaac Reeves, and Elijah Squier, commanding militia detachments posted at Newark. seized a considerable quantity of goods belonging to the "London Traders."  The seizure was made "at the Newark ferry-house, and Nutman's Barn." . . . The goods seized consisted of tea, pepper, silks, muslin, cambric, linen, and other dry goods. Of tea there must have been from 100 to 150 pounds if not more, valued at 8s. and 8s.6d. per pound. 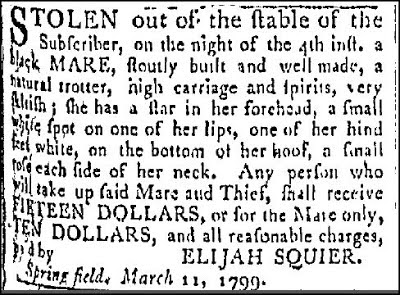 Stolen out of the stable of the subscriber, on the night of the 4th inst. a black MARE, stoutly built and well made, a natural trotter, high carriage and spirits, very ??; she has a star in her forehead, a small white spot on one of her lips, one of her hind feet white, on the bottom of hoof, a small ?? each side of her neck. Any person who will take up said Mare and Thief, shall receive FIFTEEN DOLLARS, or for the Mare only, TEN DOLLARS, and all reasonable charges, paid by ELIJAH SQUIER.
Springfield, March 11, 1799. 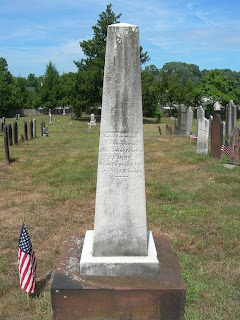 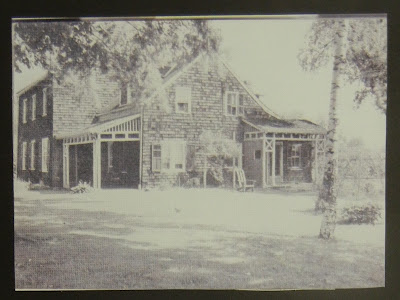 The Squier House was known to have been built before the Revolution and occupied by Squiers for nine generations. Before the house was demolished in 1977, the oldest section had been dismantled by a local resident. At the time, we were in the process of building new kitchen cabinets so my husband and I took an old painted door (yes, we did!) from the remaining pile of rubble and hung it on one of our cupboards. It is still in our kitchen after all these years and serves as a pleasant reminder of one of Livingston's oldest homes.