My paternal great-grandfather, Horace Davis, and his brothers James Wallace and Plymouth all served in the Civil War. They were the sons of Henry Wooden Davis and Eunice Fisk of Rockland, Sullivan, NY. Years ago, my uncle Alvin Davis had given me Horace's Civil War Certificate of Discharge but it wasn't until 2007 when I was writing an article for our Traces, Davis Genealogy Newsletter that I realized the photograph at the bottom of the document was the Davis brothers. This Memorial Day is the perfect time to pay tribute to them for their sacrifices; all three were discharged for disabilities. 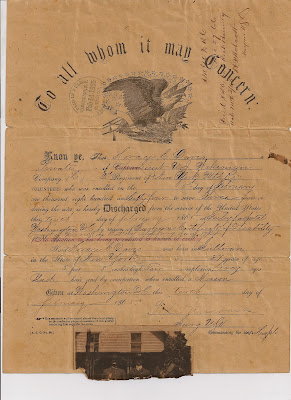 This is the Certificate of Discharge with the photograph of the three brothers at the bottom. You can zoom in and read the actual certificate here.

I'm still a little vague as to which is which but I believe my gr-grandfather, Horace, is the one in the middle, Plymouth, left ?, and James Wallace, right ?

Both James W. and Plymouth Davis enlisted within a month of each other and served in the same regiment. In 1893 they attended the reunion of the 56th Regiment in Ellenville, NY. The Ellenville Times reported Soldiers in Reunion on October 20th:

.  .  . The annual reunion of the 156th and 56th Regiments was held yesterday and the patriotism of Ellenville and that vicinity was aroused. Many houses and nearly all the business places were handsomely decorated. The firemen had trimmed their headquarters elaborately, and the town wore a gala appearance. The weather was most threatening. . . 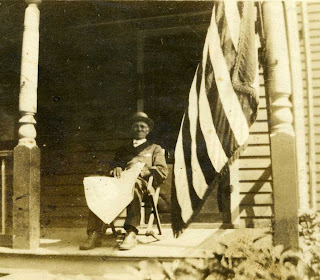 Horace Davis on the front porch of his home in Youngsville, NY. My guess is that this picture was taken after the death of his wife, Margaret Edwards, in 1917 and he was about to move to Palisades Park, NJ to live with his son, Ralph B. Davis. 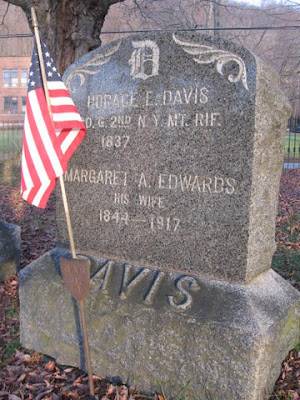 Horace and Margaret are buried in the Methodist Cemetery in Livingston Manor, NY.  According to the Bryant Funeral Home, Horace's burial cost $35.00--$13 for the undertaker, $12 to open the grave, and $10 for a hearse. He died in 1924 but the year was never inscribed on the gravestone. Photograph by JDarbeeSmith.

The Record (Hackensack, NJ), Nov. 3, 1924:
Horace E. Davis
Horace E. Davis, 87 years of age, died suddenly Monday at the home of his son, Ralph D. Davis, of Edsall Boulevard, Palisades Park, with whom he has made his home for the past eight years. He was a member of Company G, New York Mounted Rifles and was wounded in the battle of Petersburg June 17, 1864. He was discharged from service by a surgeon's certificate of disability in February, 1865.

A short service was held at the home on Edsall Boulevard Tuesday evening by Rev. John Gratton. 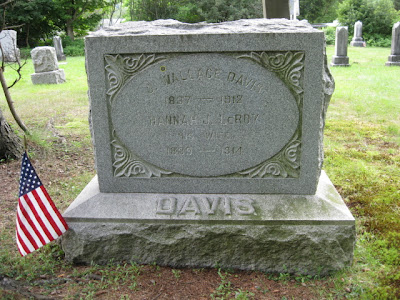 Livingston Manor Times, (Livingston Manor, NY) February 15, 1912:
James W. Davis, a lifelong resident of Livingston Manor, dropped dead on the street Tuesday afternoon from heart failure, aged 74 years. Mr. Davis had returned from a ride to Parksville just before noon, during which he was thoroughly chilled and could not seem to warm up. About 3 p.m. he was met at the O&W crossing by several persons whom he greeted in his usual pleasant manner, but one hundred feet further down the street he fell. Mr. Davis was quickly carried to the office of Dr. G H Lathrop who administered restoratives but without avail.

Mr. Davis was born near Livingston Manor on the A Mussman farm, October 1837, the son of Henry W. Davis and Unice Fisk. In 1865 he was united in marriage at Liberty to Miss Hannah J Leroy.

He enlisted in Sullivan County's regiment, the 143d, and served his country faithfully. He was a member of the Livingston Masonic Lodge and a member of the Presbyterian Church. His early life was spent on a farm near the village. He became proprietor of the Manor House and later owner of the Davis House, now Hotel Sherwood. After selling the latter hotel, he retired from active business. He was held in high esteem by the entire community, his uniformally happy disposition and cheery greeting winning him many friends.

Surviving are his wife and son, Dr. J. William Davis, an adopted daughter, Mrs. W. R. Woolsey, two brothers, Horace and Plymouth Davis, all of Livingston Manor and one sister, Mrs. Eunice Conine of Binghamton. The funeral services will be held in the Presbyterian Church Friday at 10:30 a.m. conducted by the Rev. A Mason Brown. The services at the grave will be in charge of the Masonic order, Purvis Post, GAR, of which the deceased was the commander, will attend in a body. 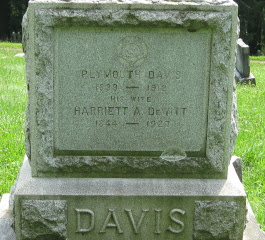 Plymouth Davis (1839-1912) and his wife, Harriet DeWitt (1844-1927), are buried across the street in the Orchard Street Cemetery. Another great photo by JDarbeeSmith.