This is a follow-up to my April post about gravestones that were signed by 'The Osborn Brothers.'

Jonathan Hand Osborn was born in Elizabeth, NJ, on February 22, 1760 the son of Jonathan and Abigail Osborn of Scotch Plains. At the age of 16 he enlisted in the Revolutionary War and served two years as a drummer for which he received a yearly pension of $85 beginning in 1831.

The signature of Jonathan Hand Osborn at age seventy-two as found in his Revolutionary War Pension Record dated August 17, 1832 on Fold3.com.

I'd like to thank Robert Lenahan for sharing the following photographs that he took at the Presbyterian Church Cemetery in Westfield, NJ. Note the various ways Jonathan Hand Osborn signed his work.


The gravestone of Eliakim Smith 1785:

This stone is erected
to the memory of Mr.
Eliakim Smith who
Died April 11th 1785
in the 67th year of
his age 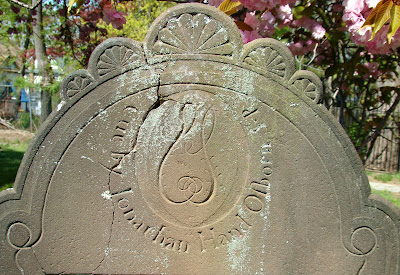 Note the 'ES' monogram in the center of this elaborately carved signature 'cut by Jonathan Hand Osborn Scotch Plains, NJ.'  The placement of the signature (at the top rather than at the bottom of the stone) may at one time have been a way for Jonathan to advertise his work. 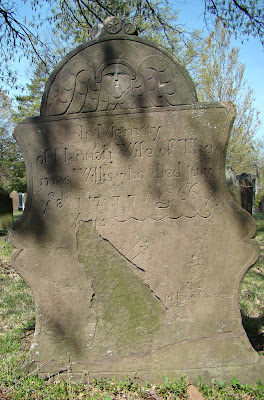 The gravestone of Hannah Willis 1777: 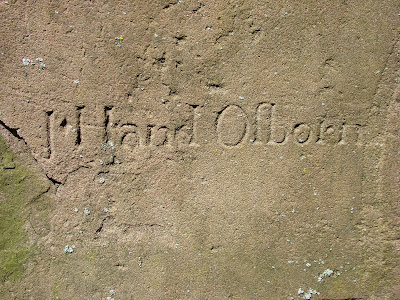 The gravestone of Noah Miller 1802:


Simply signed 'JHO' beneath the epitaph. 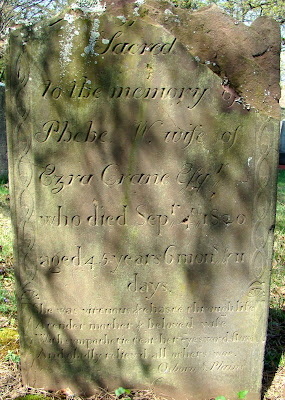 She was virtuous and chaste through life
A tender mother & beloved wife
With sympathetic tear her eyes would flow
And gladly relieved all others woe. 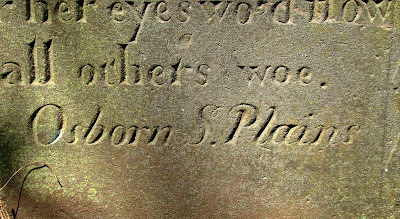 This signature 'Osborn S. Plains' is similar to the one below but note the difference in the small 's' in Osborn.

The gravestone of Cortland Radley 1821:

The Presbyterian Church of Westfield

If you have time, you might enjoy watching this documentary about the Osborn House.