The Statue of Liberty's 125th Anniversary

Not that baseball and quilts have much in common, but this year marks the 125th anniversary of the dedication of the Statue of Liberty and both my gr-grandfather and I witnessed this celebration--only one hundred years apart. In 1886 he was playing baseball looking out over NY harbor while Lady Liberty was being assembled; and, in 1986 I was making a quilt to celebrate the Statue of Liberty's 100th birthday. Somehow I feel there's a bond--a family connection. 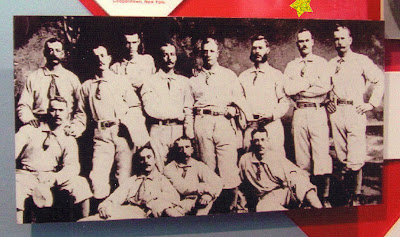 On April 29, 1886, fans attending the opening day of the National League at the St. George Cricket Grounds on Staten Island, NY, watched the game between the NY Metropolitans and Brooklyn. My gr-grandfather, Frank Hankinson, 3rd baseman for the Mets, scored one of the team's home runs even though they lost 4-3. He played professional baseball for 10 years--four of them with the Metropolitans 1885-1887 and 1889. He is 2nd from the right in the back row. 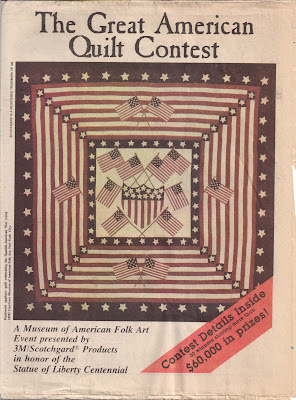 One hundred years later, the Great American Quilt Contest and Festival in honor of the Statue of Liberty Centennial was underway. The pre-registration deadline for the contest was June 14, 1985. Quilts had to be an original design and were to be judged on the "basis of originality, execution of theme, craftsmanship, needlework and overall appearance." It had to measure 72" x 72" and be "crafted from colorfast fabric." It must be hand-quilted--no machine quilting or tying allowed. 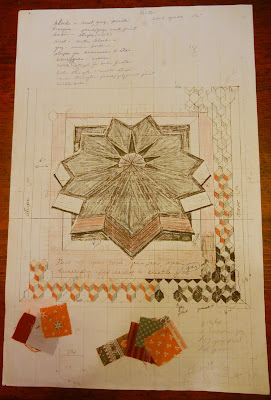 It took me a long time to come up with a design but I finally settled on this one. 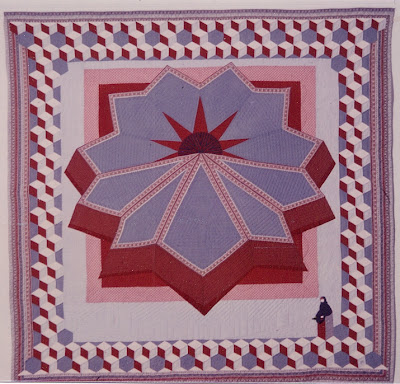 My quilt Freedom Needs No Words was chosen as a finalist in the NJ competition. The 11-pointed star represents the base of the Statue of Liberty with the seven points of Lady Liberty's crown radiating from the center. 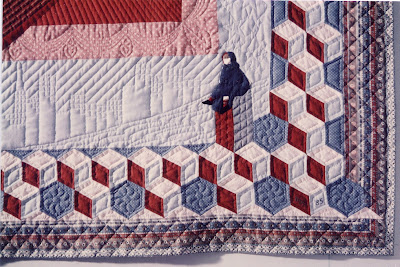 The immigrant child represents hope and freedom, and the border--strength. 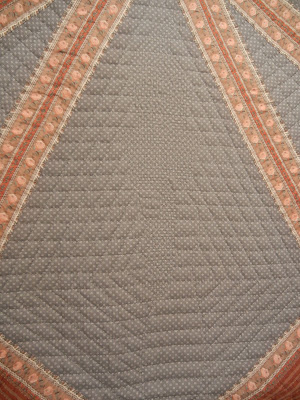 I quilted the torch in the center section. If you look real close you can see fingers wrapped around the base. 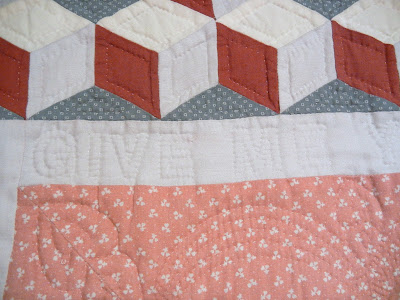 And in the top border I quilted, "Give me your tired, your poor, your huddled masses..." 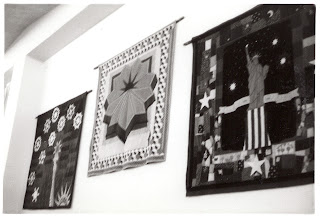 In 1986, Seton Hall University in South Orange, NJ, had an exhibit, "In Celebration of Freedom." On the left is Rita Erickson's quilt, Patriotic Pyrotechnics, my quilt, Freedom Needs No Words, and on the right is Beverly Komoda's quilt, Liberty's Centennial. Some of the quilts that were in this exhibit were purchased by the Port Authority of New York and New Jersey, including mine. 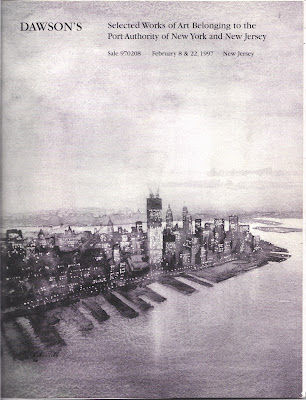 The PA had the quilts mounted onto large wooden frames and hung them in one of their buildings where they were displayed for more than 10 years. Then in 1997 when the PA decided to deaccession their huge art collection, the quilts went on the auction block--and Rita Erickson and I both bought back our quilts! When I got home I decided to throw my quilt in the washing machine and dryer knowing there was a good chance it could totally disintegrate--but it didn't. It was absolutely fine!
Posted by Barbara at 1:10 PM